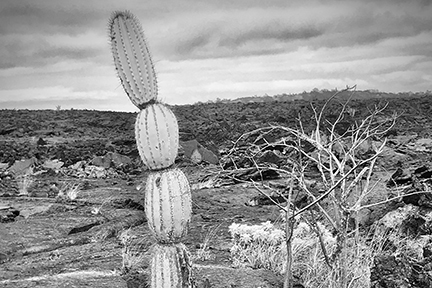 “You did say Gypsum?” said the lady behind the airport information desk.

“Yes, Gypsum,” replied Annie. “Is there a problem?”

“No. It’s just most people want information about Vegas. I’ll check and see what accommodations are in Gypsum. You have family there?”

“My aunt,” Annie lied. “The poor woman has terrible halitosis. I can’t stay with her.”

“Oh my, that sounds serious. I’m so sorry.” The lady gave a look of concern. Annie stifled a laugh. Halitosis was just another name for bad breath.

“I found something,” said the lady, looking very pleased with herself. “There is a place right in town. It’s called the Sunrise Motel. Shall I write down the number?”

“Actually, can I use your phone? I stupidly left my cell phone at home,” Annie lied again. Earlier in the day she dropped her iPhone into a toilet at San Francisco International. She fished it out, made certain it was dead, wrapped it in paper towels, tied it in a dirty plastic bag and threw it into the bottom of a trashcan.

Annie used the information desk landline while the lady went to help another customer. After a number of rings a woman with a raspy voice answered.

“Do you have a room available for tonight?” asked Annie.

“Just show up,” said the woman, who then abruptly hung up.

The heat of Las Vegas was stifling despite an unseasonal August rain. Tourists and locals rushed in and out of the terminal, hardly giving Annie a glance.

She went to find a taxi. In front of the airport terminal sat a beat-up blue Chevy Malibu with a taxi sign taped to the passenger side window.

“Where to?” asked the driver as Annie got into the backseat with her suitcase. The cab stunk of cigar smoke and stale fries.

“Gypsum? That’s over 50 miles from Vegas. Cost you a bundle.”

“Your money, missy. Where’d you fly in from?” said the driver, his ample belly pushing the boundaries of his white T-shirt and rubbing against the bottom of the steering wheel.

“I went to Frisco last year. Maybe this year or next I’ll get to LA. What’s up with Gypsum?”

“Never heard of anyone taking a vacation in Gypsum. Gonna be staying long?”

Annie hadn’t given it any thought. “Three weeks,” she replied, just to give an answer.

“You’re a pretty young gal to be out traveling by yourself.” The taxi driver tilted his mirror towards Annie. She was attractive, with long hair on the lighter side of brunette that reached down to the tip of her shoulder blades, and a slender body that made her appear younger than 18.

“Just stop talking and take me to Gypsum, Lardo.”

The driver hit his brakes and skidded over to the curb before stopping.

“What did you call me, girlie?”

“I called you Lardo. Are you kidding me? Look at your belly. It’s disgusting. And this taxi, you ever heard of the word clean?”

“I ought to slap you, talking to me that way.” The driver turned around and faced Annie.

“You try and touch me and I swear I’ll blind you,” said Annie, who with shaking hands pulled out the bottle of Mace she had in her purse for just such an occasion.

The driver put a hand up to protect his face. “Get out of my cab.”

“No Lardo,” said Annie, determined not to back down or get intimidated, “or should I say Bill Brock, driver number 21-968 who works for Happy Cab? I have a good memory. Just drive me to Gypsum or I’ll call your superiors about your disgusting behavior. OK, Bill?” Annie was startled at her bravado.

“Calm down, miss. No need to call no one. I didn’t mean nothing,” said the cab driver, putting his hands up as if to surrender.

“Yes, you did, but just drive. Just be quiet and drive, then I’ll be happy and I won’t have to talk to anyone. Deal?”

The driver paused and then sighed. “Deal,” he finally responded, turning his mirror away from Annie and pulling back out into the street.

Annie felt exhilarated. The exchange with the taxi driver would have been terrifying a few days ago when she would have shrunk and avoided any confrontations. That life seemed far away at the moment.

The taxi traveled past vast rocky fields and open, dry terrain. Scattered buildings dotted the area, but for the most part it was uninhabited. Only a few cars passed coming the other way on the two-lane highway.

Annie tried to make sense of the last 24 hours. Choosing Gypsum was random as was her flight to Las Vegas. The inflight magazine had an article about the dying town of Gypsum and how the population has dropped to below 400. The article interviewed a number of the residents, each one extolling the virtues of their small-town atmosphere and the tightness of their community.

After an hour of driving, the taxi pulled into Gypsum. The main street had potholes filled with water from the recent rain, ideal for breaking axles. It consisted of a few cross streets and a number of shops that were either boarded up or in need of repair.

Annie saw the motel sign first. It stood two stories high, held up by white steel posts. An orange and white neon vacancy sign sat on top of a rectangular sign, where in block yellow letters with a dark blue background it read: Sunrise Motel. Twelve housekeeping cabins made of whitewashed stucco surrounded a circular auto court. The cabins were weather-beaten and in need of a fresh coat of paint. The office fronted the auto court. It was made of wood siding with lime-green paint peeling off in layers. A lone cottonwood tree stood off to the side, offering the only noticeable sign of life.

The cab driver dropped Annie off in front of the motel office. She paid with exact fare. Not a word was spoken. Three beer bottles littered the side of the entrance; a layer of dust covered the faded labels. A black-and-white cat lounged by the office door, its eyes a pair of blinking slits. It gave Annie a look that asked to be petted, as if that was why anyone walked up to the front door. Annie walked past the cat, brushing her luggage bag against it. The cat acted nonchalant. Annie entered the office while the cat followed. A sign sat on the counter saying out to lunch, back by 1 p.m. It was 1:15. Annie left her suitcase next to the counter and went back outside to wait, buying a soft drink from a nearby vending machine. On the opposite side of the door was a bench, cracked and well past the peeling state. Annie took a seat. Gypsum seemed so random and inconsequential to her. It did have one important quality; it was far away and she could live incognito.

The shaded bench offered little relief from the midday heat. Flies swarmed and she tried to wave them away. Taking her palm off the top of her soda bottle, she polished off the remainder. A man came out of one of the cabins and approached her. Annie tried to ignore him.

“Hot enough for you?” said the unkempt and sunburnt man who looked 30 but might be closer to 20. He wore a well-worn wide-brimmed black hat and a faded T-shirt that must have been dark blue at one time. His face was worn and tarnished, but he was handsome.

“I don’t bite,” he said, sitting down next to her.

“What is there to do in this pit?” asked Annie, deciding to show no fear and once again to take a bold approach as she did with the taxi driver.

“You better not.” Annie tossed the empty soft-drink bottle out to join the beer bottles.

“Annie.” She smashed a fly that had landed on her forehead. “These buggers are everywhere.”

“It’s the rain. Brings the little devils out. Can’t do much about them. Heat and water and watch out.”

“Someone should spray something. Kill them.”

“Darn impossible. It’s a big desert out there. They’ll die off naturally in a couple of days.”

Walking up the street towards the motel was a short woman wearing a loose-fitting fire-red muumuu. The outfit enhanced her already oversized body. Strands of wild red hair with a mishmash of thickness fell as it pleased from her head. She carried a bag in each hand, hidden bottles rattling from her left bag. The right bag had rolls of toilet paper sticking up out of the top. The woman stopped short of the front door.

“Where’s Cat?” Her voice had a raspy cackle with a hint of southern drawl.

“Inside. She came inside when I did,” replied Annie.

“Cat isn’t allowed in the office while I’m out.”

“Can’t someone open the door or do I have to set these down and do it myself?”

“I’ll get it, Dory.” Ralphie held the door open while Cat sauntered out and sat in the middle of the front doormat.

“You’re in my way Cat. Move,” ordered Dory. Cat moved in the direction of Annie, who got up and followed Dory into the office. Ralphie came in, leaving Cat outside.

“I know. I’m not dumb. You wouldn’t like to sit on the can with no T.P. I went out and got you some.” Dory panted, her complexion a mix of milky white and crimson red. She fell back into the office lobby’s lone chair, plopping the bags to either side.

“Your key’s right there on the counter. You’ve got Cabin 6. Take your T.P., but only one. People steal otherwise.”

“You’re here, aren’t you? Thirty dollars and consider yourself checked in. And I only take cash.”

Annie put three 10-dollar bills on the counter, grabbed the key to Cabin 6 and went to fetch her suitcase. Ralphie got to it first.

“Allow me.” He picked up the suitcase and walked ahead of Annie like a porter. Annie followed behind. The one vehicle in sight was a classic Ford Thunderbird in front of Cabin 2.

“Tips are customary at the Ritz,” he said, standing at the door of Cabin 6.

“Why don’t you come back in an hour?”

“An hour?” Ralphie tipped an imaginary hat. “Whatever you say.”

“And bring some food.” Annie closed the door.

Steven’s story, The Lemon Falcon, was a finalist in Pen 2 Paper’s disability-focused creative-writing competition. In 2019, Annie on the Run took first place in the League of Utah Writers’ first-chapter contest. In 2020, they once again awarded Steven first place, this time as best new writer in creative nonfiction. His short story, The Haunted Castle, was published in My Father and I by Wingless Dreamer. Steven currently resides in Walnut Creek, California, with his wife and ukulele.