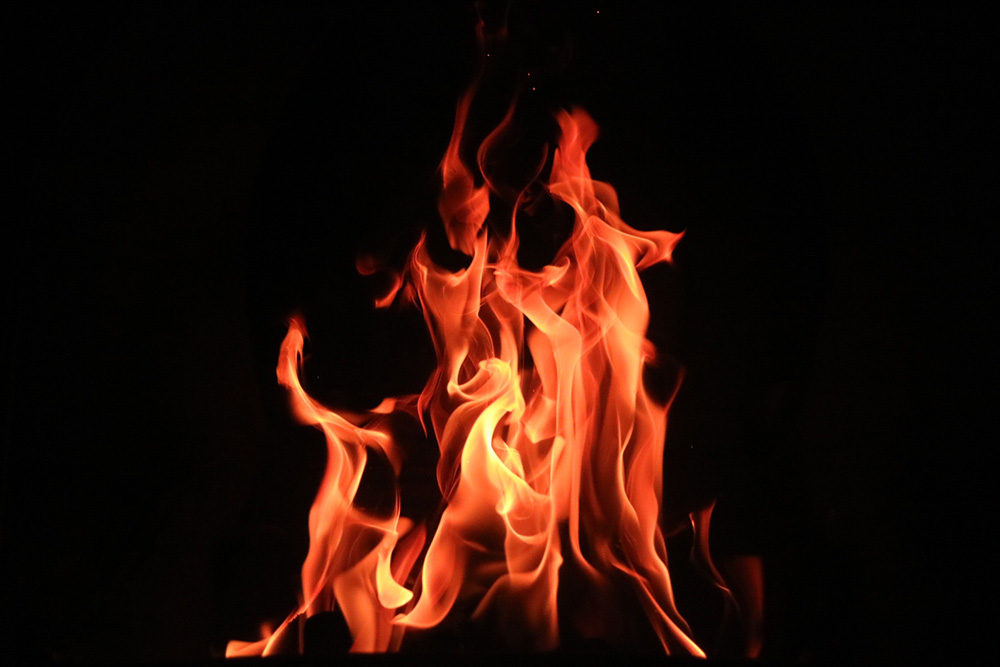 Every night I dreamt of fire, of Santa Monica Boulevard up in flames, blocks of designer merchandise torched to the ground, windows shattered, mannequins melted onto their steel pedestals. I dreamt of one spectacular disaster each night. The flames always swept east, past 4th Street, immolating strolling shoppers and Lululemon moms, toppling over palm trees. Clouds of smoke sent wheezing men in suits to the ground. Closer to the flaming epicenter, hair extensions ignited like sticks of dynamite up women’s backs, and silicone implants exploded out of their mesh sports bras with wet pops.

The fire always gained momentum when it reached Montana Avenue, moving on to destroy the rest of the storefronts and organic cafes in its way. I could feel the heat lick at me but was always just out of reach from being consumed. The flames would eventually calm and bodies would litter the street—charred anorexics—still smoking. Then I’d wake up alone in my four-poster, my skin burning.

It was the September heat wave that hit every fall across L.A. While the rest of the basic bitches of the country sucked up sugar-soaked pumpkin lattes like they were crack, L.A. got one more lethal hit of summer. Temperatures climbed, and the central AC in the Delta Gamma sorority house ran nonstop. But it was never enough to keep the heat from pressing in.

I woke each morning in a chilled sweat that would quickly turn sour. I’d take my first cold shower of the day and head downstairs for a breakfast of ice cubes. I’d dash salt on them to feel a pucker of flavor before braving a hair dryer on my scalp, the straightener set to high.

Earlier in the summer, I’d been able to follow my morning routine alone, in peace. But now the sorority was back for the new school year. Classes had started last week, which meant that 20 girls were crammed into eight rooms. In teen comedies, sorority living was a wet dream of pillow fights and towel-clad hotties. The reality is that girls are fucking disgusting. Living in the Delta Gamma house involved stray hairs of every length, texture, and color in the sinks and showers, blooming red tampons spilling out of Target trash cans, watered down Starbucks containers sweating on every spare surface. And the noise: one giant cacophony of vocal fry.

Fall rush had ended, the time when sororities hosted a five-day slaughter of tea parties, dinners and mixers to find recruits for the upcoming school year. I had skipped and gone to Cabo with a small group of other fifth years who were also graduating soon and didn’t give a flying fuck about protocol anymore.

I couldn’t stomach another rush, the cringe-worthy afternoons sorting through girls in knockoff LVs and cheap skater dresses, smiling at the eager, pathetic faces of potential recruits.

I regretted the decision to skip rush immediately on my return to the sorority house. We were “diverse” this year. Panhellenic orders. DG was to reflect the larger student population, which meant disregarding basically every elitist standard a sorority stood for. One of the incoming freshmen could have lost a solid 20 pounds. Another had psoriasis and cysteine acne. BOTH.

Existing at the same time. I felt a little bad for these new recruits, I really did. They were going to need to blow so many SAEs to make up for their deficiencies.

Since when were sororities equal-opportunity providers? The entire point was to establish the connections that could help you shove your way to the top.

I woke one morning from another nightmare and couldn’t remember what day it was. This had been happening more and more. I checked my phone: Tuesday, 10 a.m. Most of the house would be gone, attending class. I entered the shared bathroom, and the air was still heavy with fruity body wash and sweat. Mandy and Amy, fellow fifth years, were shaving their legs over the sink.

“I can’t believe how hot it’s been,” Mandy continued.

“Hopefully, this is just a heat rash on my upper thigh.”

We had spent the last five years together, four of them living in the same house, and yet Mandy and Amy weren’t my friends. I didn’t even like them. I’d graduate, unfollow the two on social media and never think about them again.

“Wanna go to the rec center later?” Mandy asked me as I dried my hands and snatched somebody’s bottle of Gucci perfume from the counter. I could prep my hair and makeup in my room and then shower later.

“I have some pretty important errands to run today,” I said.

I structured my weekdays around four important categories: fitness, self-care, shopping, and socials. It was harder than it looked. I often found myself in my Mercedes, winding down random streets, seeing what avenues I had never been down. It was so easy to get lost, one extra turn off the main thoroughfares and I found myself at a dead end, in a deserted park or ugly stucco apartment complex.

I took the Mercedes west toward the mansions above San Vicente, passing clipped grass and junky gardener trucks. A street I had never heard of before—Lexington Boulevard—dumped me out near the ocean, over the cliffs of the Palisades. I parked near the promenade and walked past misters and fountains, moms and their little brats. The stores were too low-end and I found nothing. Those were the worst days. I settled for a manicure even though I just had one two days before.

“Strip them,” I instructed the manicurist.

I looked over the samples, the several dozen keychains of replicated, matching oval nails and thought of a technicolor corpse. I settled on pink, the color I was already wearing, this time a shade darker, a slight neon over the cotton candy of the old coat.

I needed an escape from the heat, so I checked the movie times at the ArcLight. I liked to catch a film at least once a week, as old fashioned as it was. Romantic comedies were my preferred genre. There was such a clear ride of emotions: initial distaste, re-examination of prior assumptions, growing attraction, misplaced anger, and mistrust, then finally a reconciliation. I could let my mind wander and still clearly register each character’s emotional trajectory, even if I couldn’t feel those things in myself.

I settled on Will You Be Mine, featuring Johnny Depp as an eccentric mining tycoon working somewhere in South America during the 1950s. Jennifer Lawrence played his sassy young secretary, who was rethinking a career as a cabaret singer. She was just about to quit when the evil head of a rival mining company plotted to leave the two for dead in the wilderness. When they were first ditched in the rainforest together, they hated each other. But after a random mining disaster allowed Depp’s character to rescue Lawrence from an unrelated band of rabid tree monkeys, they fell in love and got married at a conga lounge.

The movie contained all the expected beats, but as I was walking back to my car, the humidity of another 95-degree day bearing down on me, I could only think about how fucking old Johnny Depp was starting to look. He needed a tuck under his jowl. Jennifer Lawrence was also starting to show her age. It ate at me on the drive home.

I forgot it was rush hour, and people would be driving back from work. I crawled along Wilshire, inching slowly toward the backlog of cars waiting to enter the 405. I only needed to cross under the freeway pass and I’d be nearly home, but that last mile stretch could take half an hour.

I heard screaming. Two guys about my age were waving from the sidewalk, trying to flag me down. At first, I didn’t notice them since they were fat and pasty. When I met their gaze, one of them barked, “Show me your tits!”

When I didn’t react, they began miming obscenely, pointing at me. I thought briefly of what it would feel like to swerve to the right and plow into them. I thought about how far their bodies might fly if their barreled guts might explode. I felt oddly satisfied for the first time that day.

Laura Picklesimer’s fiction has appeared in Riprap, Bookwoman, the Santa Ana River Review and the California Current Writers Series, among other publications. She was the grand prize winner of Enizagam Journal’s 2018 Fiction Contest and received third place in the Women’s National Book Association’s 2018 YA Fiction Contest. She teaches English and creative writing at Chaffey College.