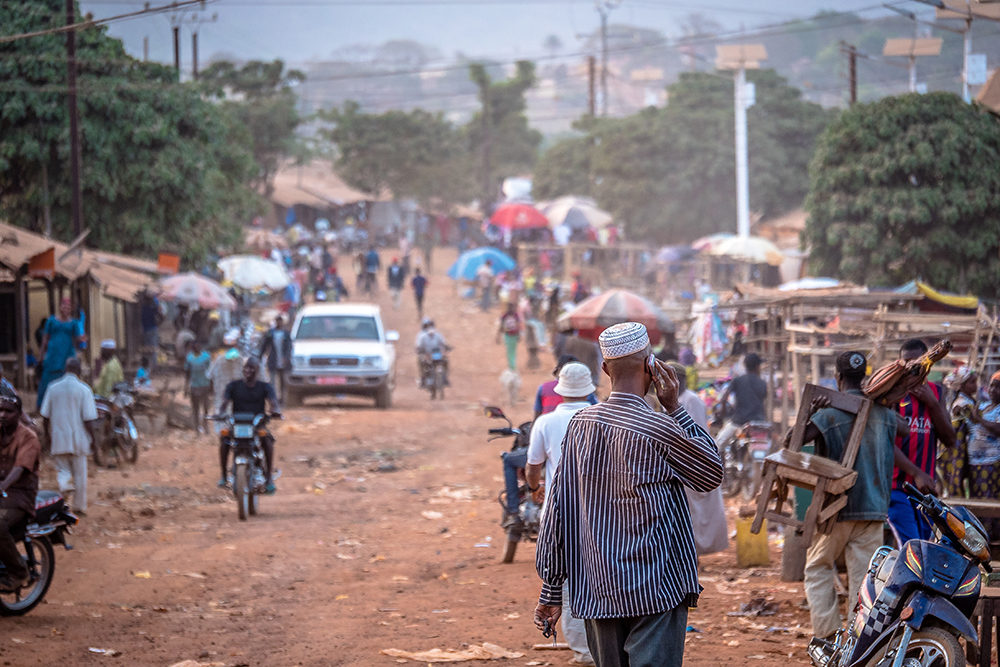 Find the tire on the bank of the weed-choked canal, treads faded to brick-red sludge. Roll it. With quick steps and quicker hands to the middle of the road that connects the university to the rest of the city.

Drag a bed frame into the middle of the road. Break the kiosks for fruit and vegetables. The splintery palettes burn quickest. Dump the oranges out of a cardboard box and shred it for kindling.

Lean with your comrades into the center, where the heat is. The one in the knit cap, the one with dreadlocks, the one with the scarf, and you, freshly barbered, as lanky as a lamppost, all femur and fish oil. Each with something to tie around his mouth and nose. Pull off your t-shirt and wrap it around your face. Expose your shea-buttered chest. Stuff twists of tissue up your nose. Dance in the middle of the road.

Shout liberté! Faux pas forcé! Because F is the first part of Fuck, even in French.

Dance in the neighborhoods that flood first, where jittery fish is sold from donkey carts on sandy roads. Dance for the boy who was hit by a live bullet when the rubber ones ran out, for the soldier who set himself on fire in front of the President’s palace. Dance for what makes your head explode when you think about it — no power, no water, no jobs. Seven seconds for Youssou N’Dour, who is on your side.

Watch smoke balloon up, higher than the tallest gum tree.

The convoy snakes around the corner, rectangles of black metal, like children’s blocks. Chant louder when you see the truck. Faux pas forcé!! Because they have forced you into this. The price of rice has gone up three times this year.

In front is the gunman, loading and shooting tear gas bombs. Pop of the cannon against pop of the burning tire as the truck crushes the metal bed frame, the splintered palettes. The next projectile goes through a car window and onto the seat. Steam pressures the windows. Force the door open before the whole thing blows.

Line up facing the gendarmes, chest to chest. Beat your stick against plastic riot shields. Shout at the one who faces you, who thinks he is a big man, with those army boots, that gun, a belly full of roasted dibi. With his shield, he pushes you back into the crowd.

Rub your stinging eyes. Dodge the hose that sprays the crowd hard and cold. Smoke blinds the tank driver.

Seek shelter behind a waist-high brick wall. Leap for cover when the tank swerves too close. You will not make it home before your mother hears the story about the kid who was crushed by the tank, and wonders if it was you.

Tej Rae, author of “I Hum Delilah,” is a freelance writer currently based in Rome. Her publishing credits include The Washington Post, BBC Focus on Africa magazine and many others. She has two children and travels with her husband, who works for the United Nations.